The Marienborn Memorial to Divided Germany opened on August 13, 1996. A passport control unit, automobile entry point, customs processing area, and command tower are open to visitors. The historical context is described in the permanent exhibition “The GDR Marienborn Border Crossing: Bulwark, Eye of the Needle, Seismograph,” which opened in the visitors center in 2000.

The Hötensleben Border Monument became a part of the memorial in 2004. It shows the development of the inner German border fortifications from 1989. Covering 6.5 hectare of land along 350-meters of the border, it is the best preserved example of fortification facilities. 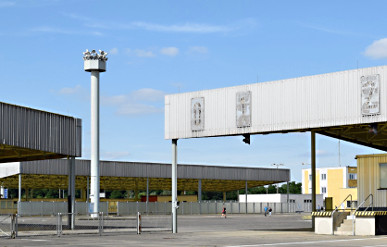