Emperor William had the Cecilienhof Palace built from 1913 to 1917 for his older son, Crown Prince William, and his wife Cecilie. The palace was erected in the northern part of the Neuer Garten park grounds in the style of an English Tudor country house. Even after the monarchy fell, the royal couple continued to reside in the palace with its family until 1945.

The Potsdam Conference of the Allied Powers of World War II -- the United States, Great Britain and the Soviet Union -- took place here from July 17 to August 2, 1945. The three heads of state, Truman, Churchill (Attlee as of July 28) and Stalin negotiated the future of Germany and a reorganization of Europe around a round table here. The summit talks ended with the “Report of the Tripartite Conference of Berlin” that became known in history as the Potsdam Declaration. As the Cold War was emerging, the foundation was laid for the Iron Curtain and the later division of Germany.

In 1990 the Cecilienhof Palace became part of the UNESCO world heritage sites of “Palaces and Gardens of Potsdam and Berlin.” Every year it receives more than 150,000 visitors from all over the world.

When Germany was divided, the Glienicke Bridge, constructed in 1906-07, became a meeting point between West Berlin and the GDR. The border crossing on the bridge was used in 1962, 1985 and 1986 as a place to exchange 38 people from East and West (including spies).

Villa Schöningen stands at the Glienicke Brücke, the former meeting point between East and West. The tower villa erected by Ludwig Persius in 1843 has a long and vibrant history: first inhabited by the Jewish Wallich family, it became an art site that fell victim to both the Nazis and the Soviet communists. Used in the GDR as a children’s home, it fell into disrepair after the fall of the Berlin Wall.

In 2009 Villa Schöningen reopened to the public as a site of history, art and freedom. In addition to changing art exhibitions, it also presents a permanent exhibition on the history of the villa and the Glienicke Bridge. 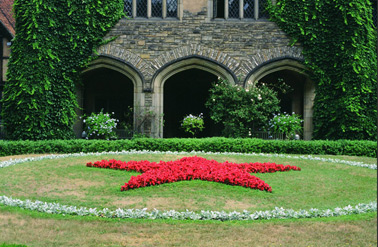